Here comes the biggest news from HDFC bank for those who’s minting money with the most lucrative Diners Club 10X Rewards Programme which helps to save upto 33% with Diners Cards with no upper limit (in past) on partner brands. While i entered pretty late to the game, i could see HDFC understood the potential loss and finally have put a cap on the amount of reward points you can earn in a particular statement cycle. However, the number is good enough for Diners Black variant. 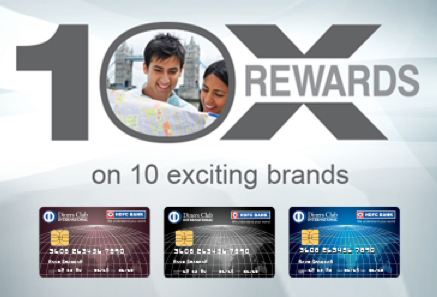 They’ve added more partners to the 10X rewards programme thereby making it sound BIG, but not actually that big. While some brands got removed, like, clear-trip, new brands like lifestyle, Myntra, Uber, Makemytrip are new to the list. Here’s the full list that’s going to be active until March 2017 (at-least that’s a good news).

Apart from these changes, there are also new rules like,

This is BAD. Finally they’ve made it too long to wait for the points. This is dangerous as no one knows when then gonna devalue the cards, point value etc like they did for allmiles and moneyback recently. While they have the ability to make us spend more and finally devalue the card as usual, i believe they wont do it with Diners cards as the primary value of Diners cards is that it rewards travelers.

Note: I still see Clear-trip site says the 10x promo validity is upto Dec 2016. Not sure if that still holds true. Maybe HDFC doesn’t want to mention the brands that are not active until March 2017, or maybe they’ll add more in future, or maybe “10x rewards on 10 partners” tagline sounds good for them 😀

The Future of 10X Rewards on Diners Cards

Though the Diners cards acceptance issues in India still exists, the lucrative 10X rewards programme is a surefire way to increase the penetration of Diners Club credit cards in India. They’re also increasing the acceptance level gradually online and also offline as mentioned in my recent post – Diners and Discover Cards now Accepted on Axis Bank Swipe Machines which all makes clear that Diners club is moving in right direction to compete with Visa & Mastercard in India.

Will they Extend this 10X rewards for one more year?

I firmly believe 10X rewards will continue to be there with Diners cards as that’s the major reason for anyone to hold Diners Card, else simply we can switch to Regalia/Infinia. While we maynot know how long this gonna last, i’m pretty sure it’ll be there until 2017 year end.

But 2018 maybe a game changer as everyone will start availing this card for 10X offer, in meantime the acceptance will also grow to a level of Visa/mastercard and then it becomes like any other card. They’ll then stop the 10X (or) maybe make it 5X like Visa cards and obviously devalue it and play all those games that they’re currently doing with Regalia.

Apart from this, we may also expect a shuffle in the partners list. Lets see what HDFC Diners has for us this Financial year 🙂

What do you think the future has for Diners Cards and its 10X promotions? Feel free to share your comments below.