Recently i wrote an article about the HDFC Moneyback card devaluation which is a big news for the Moneyback credit card holders. Following that, HDFC Allmiles credit card also gets devalued bigtime along with introduction of some new premium card variants. 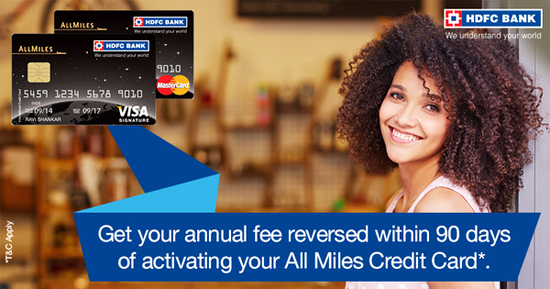 I have no idea while a premium card is getting devalued from lounge access and that too, all-miles is specifically designed for travelers and revoking such benefits is not a good idea. It looks like next to Moneyback card, Allmiles credit card has the next big # of users and HDFC doesnt want to loose a lot of money hence planned the point value reduction.

Apart from these changes, many of our readers have mentioned that HDFC isn’t issuing Priority Pass card since June. While i can see that the benefit is still there as per their website, i see that HDFC doesn’t want Allmiles card users to avail Priority pass easily for obvious reasons.

However, i can confirm that they still have 4 free access on Priority Pass as one of my friend recently used his PP card in 3 lounges and he’s not charged for the same.

Following this, there is a new card called Regalia First & doctors regalia which i noticed recently on their new credit card application form(physical). This stands between Allmiles and regalia credit card and looks like devaluation wont happen on regalia as they may not issue Regalia easily but issue Regalia First instead which has less benefits.

So if you hold Allmiles card, it makes sense to upgrade it to Regalia First which has better benefits and point value. I’ll write about “Regalia First” in detail shortly.

These recent devaluations makes some sense to HDFC bank because they’re recently issuing all cards for Life Time Free and so they don’t make any money from annual card fees and hence they have to do something to make sure they don’t run business in loss. Hence the changes!

What do you think about the recent Allmiles devaluation? Share your views in comments below.

47 thoughts on “HDFC Allmiles Credit Card Devalued and other Changes”