ICICI Diamant Credit Card is the ICICI Bank’s top end invite only credit card usually issued to its Private Banking customers. But hey, I doubt whether ICICI bank has gone nuts while designing their super premium card features, more on that later.

At-least good to see a annual fee waiver on spend, though its pretty high. 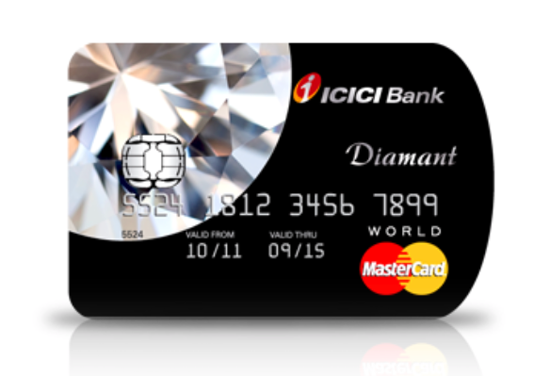 It appears that the person/team that deals with designing the entire ICICI Bank credit card portfolio and the card offers is not-in-line with the real world and should really learn from the competitors.

Their 0.75% reward rate on Diamant Credit card is too low like any other normal entry level credit cards and the features are nowhere nearer to the kind of joining fee they charge for it.

This is what their website says, which may save a lot of money if you watch movies in PVR Gold class. If ticket costs Rs.1000, 4 tickets month for 1 year can save a nice Rs.48,000. Umm, not sure how far this is real.

Overall, the benefits and features displayed on the website seems to be very much outdated and the phone banking officers neither have any clue about the updated feature of the card.

As you can see, the joining fee does not compensate the kind of benefits you get out of it. I called up their concierge to figure out what they’re upto, but disappointed to experience a poor yet-another customer care executive touch and he has no idea what to say when i asked for the card’s special features. Even for a celebrity, this card will be of no use, unless given for free.

This is the information I have at the moment about the card and i’ll keep adding more as i hear more from other readers and the bank. Looking for other super premium credit cards? check out my list of  5 Best Super Premium Credit Cards in India

Update – April 2017: My RM said they discontinued this card since March 2017 and is no more open to new applications.

What do you think about ICICI Bank Diamant Credit Card? Does anyone got an invite or hold one? Do let me know in comments below.